In the NICU - Medical Care

Some babies in the NICU get emergency blood transfusions when they have bleeding and need the blood, which they lost from bleeding replaced.

Newborn babies, especially those born preterm, have a small amount of blood in their bodies. They are not able to make new blood cells in the same way that term babies are because their bone marrow is immature. The team looking after your baby have to take away some of their blood by doing blood tests. Sometimes being unwell reduces baby’s blood cell count even more. Sometimes a baby’s blood count becomes low and they have anaemia (See Anaemia). One treatment for anaemia is a blood transfusion. The neonatal team try to avoid blood transfusion if possible, so that baby can try to make their own blood cells. This can take a few weeks for babies to make their own blood cells, so sometimes the neonatal team need to give a blood transfusion. The team looking after your baby carefully check babies before blood transfusions and carefully monitor babies during transfusions.

Babies in NICU get special red blood cells that come from special blood donors. The National Blood Centre in St James’ divides one adult bag of blood into five small packs called ‘Pedi-Packs’. The designated Pedi-Packs are set aside and are given to a baby as needed for the 35 days that they are available.

This is a little tube that goes into the space between baby’s ribs and their lungs to drain off air or fluid that should not be there.

Sometimes babies can become so unwell that their lungs do not work properly, and even though the neonatal team try really hard to help baby with the ventilator, sometimes it does not work. If the team looking after your baby think that baby’s lungs can get better in a little while – your baby is referred to the Swedish team for ECMO. ECMO is able to put oxygen into baby’s blood without using their lungs. The ECMO machine takes over the work of baby’s lungs. ECMO keeps baby stable until their lungs have got better, which can take up to a week. The treatment is very complex and is usually performed by a specialist ECMO team in Stockholm, Sweden. When they accept the hospital’s referral, their experienced, specialist team fly to Ireland, start the ECMO procedure, and then transport the baby to Stockholm for this treatment. Parents can travel to Sweden on a commercial flight. Baby stays in Sweden until the Swedish team can take baby off ECMO. In Ireland, approximately 6 babies require this treatment annually.

An endoscopy, sometimes shortened to ‘scope’, is a procedure that uses a flexible tube with a camera attached to look inside a part of the body.

This is a procedure, which is done when a baby has very severe jaundice and is not getting better on a lot of phototherapy lights. This involves replacing baby’s blood with blood from an adult donor.

Extubation is when an endotracheal (ET) tube used for ventilation is taken out of the trachea (windpipe/airway).

This is when humidity inside an incubator is used to reduce water loss from the delicate skin of very small preterm babies. The walls of the incubator will look fogged up when humidity is on.

The insertion of an endotracheal (ET) tube into a baby’s trachea (windpipe/airway), so that oxygen and help with breathing can be given via a ventilator. 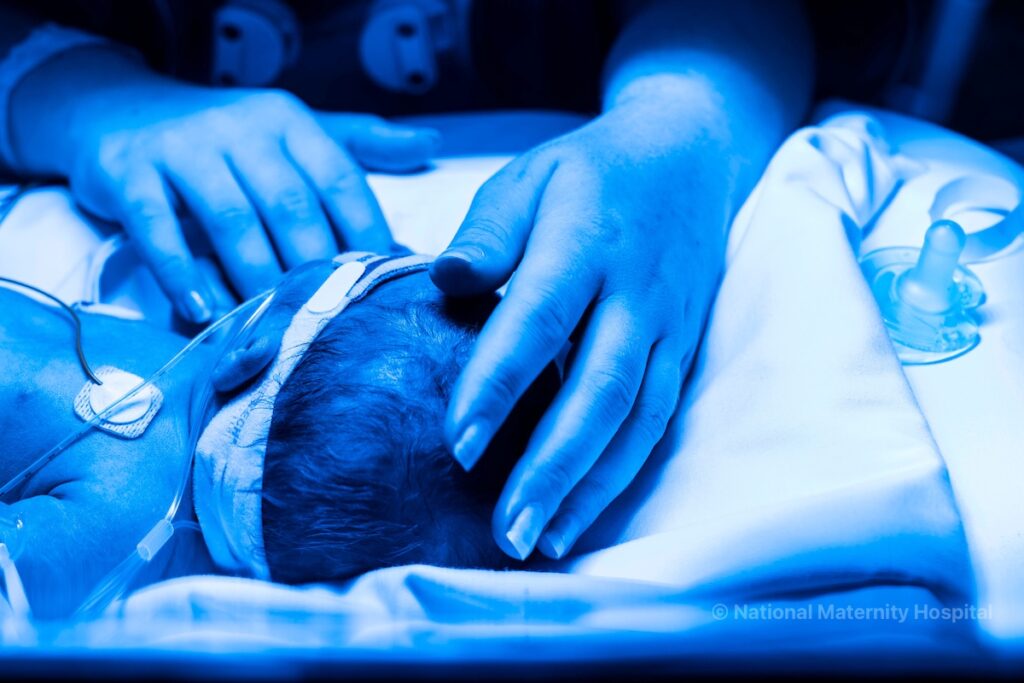 Phototherapy is used if a baby is jaundiced. It consists of special lights placed over the baby. See ‘Jaundice’.

Babies undergoing phototherapy are nursed without clothing, so that the maximum amount of their skin is exposed to the phototherapy light.

Eye pads are used to protect the baby’s eyes from the lights.

Therapeutic Cooling (TC)/Therapeutic hypothermia:
TH is when baby’s body temperature is cooled down to 33.50C on purpose. A baby’s normal body temperature is 36.5 – 37.50C. TH is the only treatment that makes some babies better when they have HIE. The treatment goes on for 72 hours. At the end of the cooling period, the baby is re-warmed back to normal temperature.
Ventilation:

Ventilation is a form of respiratory support. See description on LINK.

Ventriculoperitoneal (VP) Shunt: This is a tube with one end put into the ventricles in the brain, and the other end is put into the abdominal cavity (in the tummy) to drain cerebrospinal fluid. This is used as a treatment for hydrocephalus