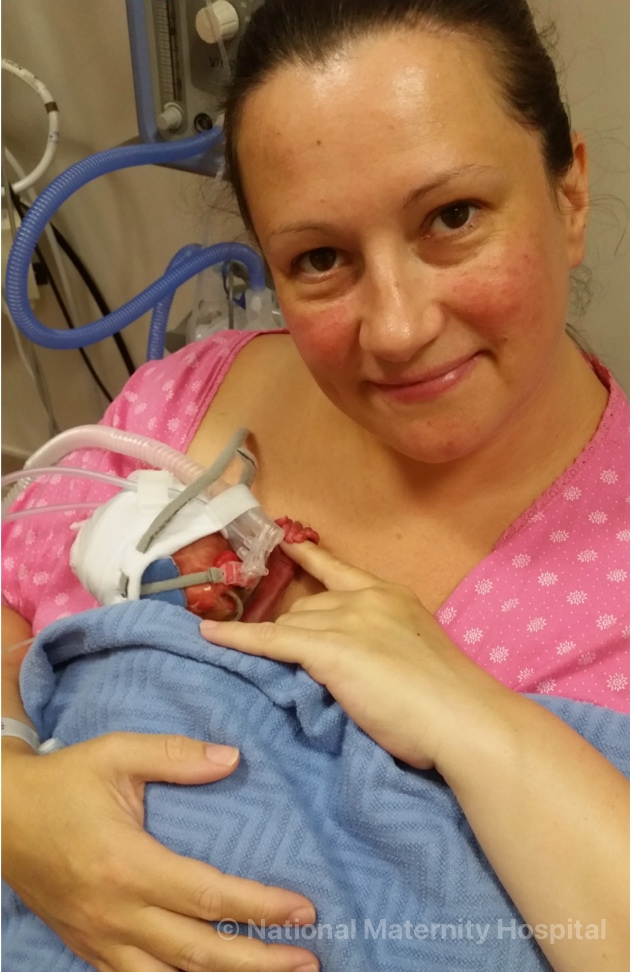 I always dreamed of having children, however after two colposcopy LLETZ procedures on my cervix, we lost of first baby, our little angel Matthew, in June 2010, due to incompetent cervix. That Christmas Eve in 2010, we found out that we were expecting again. This was a pregnancy that I walked on eggshells for. With rest and constant supervision and a cerclage stitch, our precious daughter Ciara arrived safely in August 2011.

In January 2015, we found out that we were expecting once again. My nerves were gone, and I was so anxious. 17 weeks arrived, and I was admitted to hospital in Mullingar with severe bleeding, then transferred via ambulance to Dublin to The National Maternity Hospital (NMH). After several emergency admissions over a few weeks, our rollercoaster ended and our gorgeous son Conor was born at the NMH on the 9th of June 2016, when my waters broke at 27 weeks and 2 days.  Conor weighed a whopping 2 lbs and 1oz (915g). He was delivered by emergency caesarean section at NMH.  All I really remember is asking why he was not crying.  I didn’t see him, as he needed to be whisked away to NICU before we knew it.  The room was filled with doctors, nurses and other people, but I felt so lonely, lost, and scared, as I was among everyone who saw and held my baby, yet I had not seen him or held him.

I was administered lifesaving steroid injections for Conor’s lungs and IV Magnesium for Conor’s brain when my water broke and before he was delivered, and because of that, Conor came out breathing on his own, with the help of CPAP and didn’t require ventilation.  He was on CPAP for seven weeks. He developed an infection and was treated on several occasions with antibiotics.  I will never forget walking into the NICU for the first time. I won’t forget the noise of the beeps from the lifesaving incubators, the dark dim lighting and the blue brightness of the jaundice lights. I won’t forget the size of the little tiny bums sticking out in the air, as the babies rested on their tummies, like tiny little red dolls. The NICU nurses stood over each baby, like guardian angels. I went to Conor’s incubator, and I didn’t see what I expected. He didn’t look like the image of my baby that I had in mind.  His skin was red, his eyes were covered by what I describe as baby sunshades, I could not see his face because of the huge CPAP mask.  He had tubes everywhere and he made no baby sounds, no cries, no tears. There was nothing but the sounds of the monitors.  My little brave soldier had a big fight on his hands. 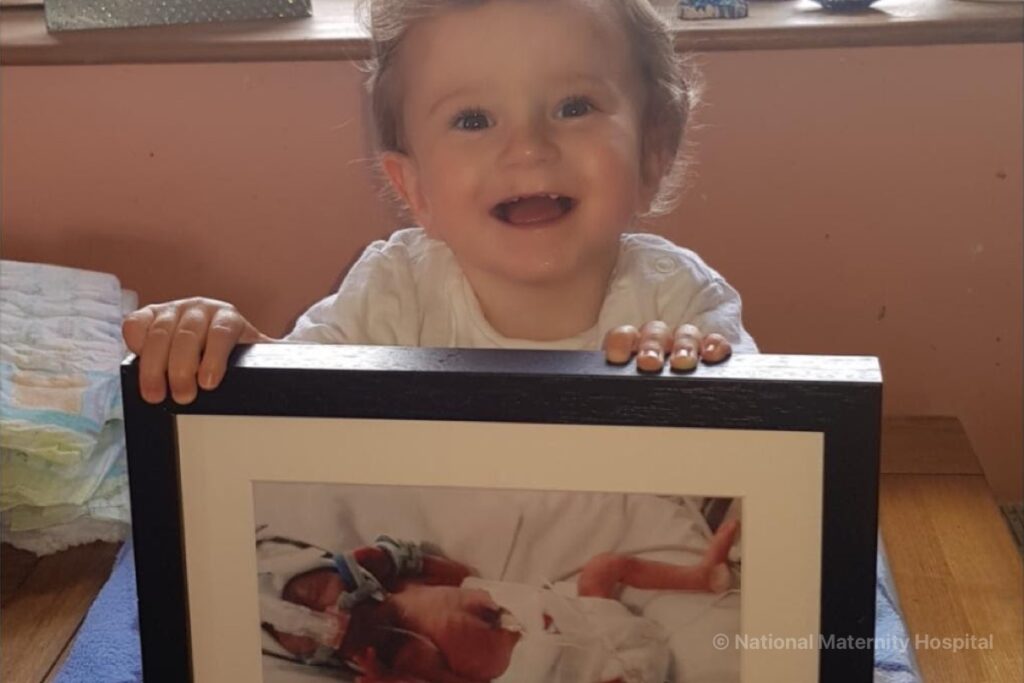 I remember the nurse telling me after a little while in NICU that I could hold my son Conor in Kangaroo Care. I thought what the hell is Kangaroo Care? It hardly involved Kangaroos, did it? To my absolute delight, Conor was placed skin to skin on my chest, tubes and all. That feeling is indescribable, the warmth of his touch, the goosebumps, feeling his slight movements, the noise of the CPAP. I was holding my son and he could hear my heartbeat once again.  Finally I felt like a Mum for the first time with Conor. The nurses did his cares daily and I remember after about 5 weeks, seeing his little face for the first time when they removed his CPAP mask for cleaning and cares.  His face was scrumpled up and squashed, he looked different and that scared me.  However, the nurses assured me this would fix itself, and it did, he is 100% the cutest little boy ever.

We spent the next seven weeks, up and down from home in Westmeath to Dublin, delivering Conor precious breast milk that I had pumped the night before every 2 to 3 hours and which the NICU staff labelled and stored in freezers on the neonatal unit. Doctors came and updated us every day and assured us that Conor was very strong and he would be ok, but I found that so hard to believe, that this little red doll would come home to us safe and sound.

The world of the NICU is like another planet, I looked into the eyes of other parents at their babies’ incubator, or in the parent room. I saw the fear and the anxiety that I felt in all their eyes. We all understood, we all knew what each other was going through. Without having to speak, we comforted each other and helped each other.  We have made lifelong friends from our NICU journey.  It is an emotional, fearful, magical, addictive and obsessive world.  I found I couldn’t wait to get to the NICU to see my baby. It was my safe place and leaving the NICU was something I knew had to happen but didn’t want to happen, as I was so dependent on the monitors, the staff and the friendships.  How would I do this now on my own? 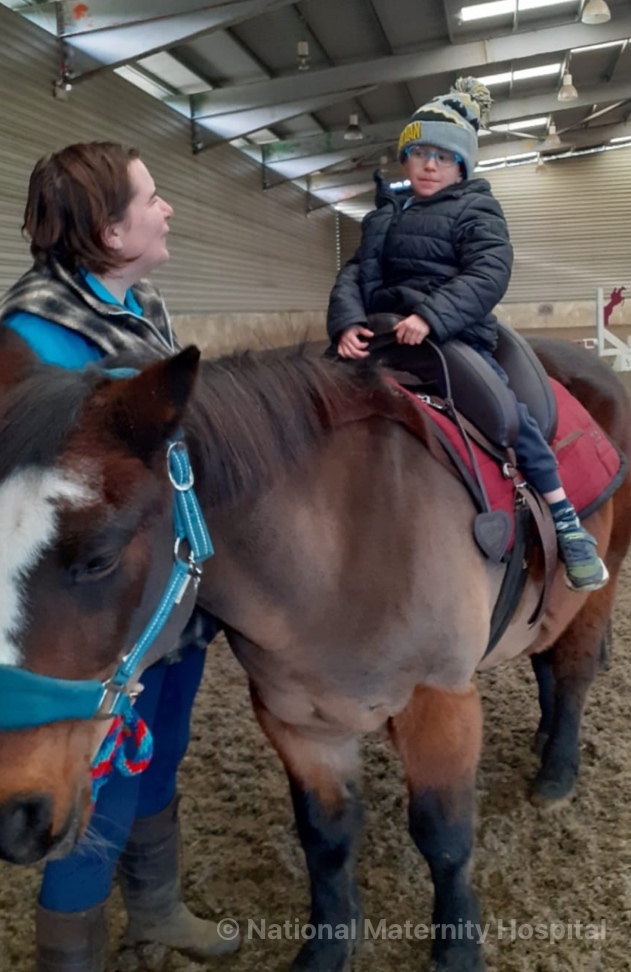 In late July, we were told that Conor was transferring to Mullingar Special Care Baby Unit (SCBU) so that he could feed and grow. He spent four weeks there and came home the last week in August, weighing 4.5lbs, just in time to see his sister Ciara starting school for the first time.  He was amazing, handsome, precious and all ours. He made it. He survived the rollercoaster and defied all the odds and he came HOME! The doctors were right, they told me the truth, that premmie babies really do have super-powers and I can honestly say the bond I have with Conor will wrap around our hearts forever.

Being premature has its difficulties for some babies. In our circumstances Conor had food aversion and severe reflux.  This stopped him feeding properly.  He refused bottle feeds and we, as a last resort, had to feed Conor his breast milk with a syringe, so he was getting 4-5 oz via syringe, then because of reflux he would vomit and we would have to persevere and start again.  He has had many hospital stays in Paediatrics in Mullingar, all due to feeding.  We met a wonderful doctor there called Dr Sharif, and she saw something in Conor that suggested he might need to be assessed by Early Intervention.  She referred him to Mullingar Early Intervention and after assessment, Conor was given a diagnosis of Autism Spectrum Disorder (ASD).

Conor is the most wonderful, funny, active, crazy and loveable little man.  Everyone that meets Conor, falls in love with him Immediately. His favourite thing to do at the moment, is sing and dance to the soundtrack of Michael Jackson. He now attends School in a special class in Westmeath, and he is doing so well.  Writing this has me in tears, as this journey has certainly been a whirlwind of emotions and recalling my time with Conor is emotional but rewarding. I am so proud of him and of us as a family, we are a team, Mammy, Daddy, Ciara and Conor, we make it all seem worthwhile, and I would not change a moment of it for the world. NICU and the people I met have given me a new lease on life. The National Maternity Hospital saved my son’s life, and I am forever indebted to all the staff. My NICU friends are my shoulders to lean on in dark and lonely times and my children Conor and Ciara are my motivation to get up every day and face the future, because our future is bright with our little NICU premmie warrior.